I started writing another epic Facebook status update earlier and realized, like my friend Ruthie said, I’ve been writing all along… just not here. With how senseless FB has been in banning me over picture after picture of baby booty or babies on boobies, it seems silly of me to be such a mule for their benefit instead of just locating my brain drainings on a site I pay to own and am ignoring. I also finally realized and moreover, have come to embrace that there is no day that is going to come where I’m going to burst out of my grief and have the next chapter all summed up, world hunger solved, wars ended and everyone home in time for a locally, sustainably grown dinner. It’s just not going to happen. There self, I said it.

Since the time I last wrote, my Facebook page has nearly reached that shimmering 20,000 “likes” status (and nearly as many here) that I used to think qualified real and experienced bloggers who had some sort of schpiel, smarts, snark and schedule worked out (‘The 4 Ss of Successful Social Media?) to make themselves and their pages unique, interesting, admirable and entertaining… yet here I am in that very seat with none of the things I thought would or should be here, in my heart, head or online presence.

I feel like there should be some sort of an event, an epiphany, an obvious breakthrough or change to accompany the numerical one. Most pages I’ve seen approach the 20,000 mark get excited and ask for shares to help reach that elusive number… I feel like I’m not there yet, I still don’t know what I’m doing and I feel like I should by now. So, instead of trying to push myself over the mark, I’m going to take this as an opportunity to attempt to distance myself from it and weed out the people that don’t want to be here, before I get some random influx of people that are just going to judge me sooner or later for being exactly who I said I am in the first place.

The distance between now and the last time I wrote here (which is actually a new “here”, since I’ve switched to WordPress from Blogger) feels like 20,000 leagues under the “blue and lonely section of hell” Stephen King refers to (within the 1000 Oceans Tori Amos refers to -video at the bottom, if you make it that far. Nearly all of my dreams have been of the sea lately, but I digress… Where were we? Right: 20,000 leagues) instead of as many people drawn to it. 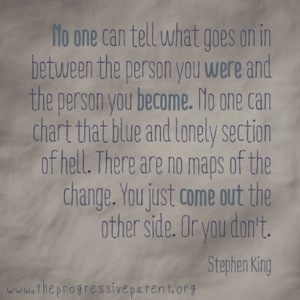 I know my page didn’t get popular because of my writing- the last time I wrote anything, I had just over 4,000 likes. I’m at this mark because my son somehow died and I somehow didn’t, and people don’t realize that either of those things are possible. They are both utterly incomprehensible, inexplicable happenings that warrant facts that other people can list and use to prevent these things from happening to them. With SUDC, there is nothing even I can do to prevent it from happening again, even with my existing children. It continues to haunt my days and I have no comfort to offer.

When your baby dies, you don’t die because the Universe doesn’t let you, not for the lack of wishing, not for the lack of sorrow- unless you do. But if you don’t somehow follow with spontaneous separation from your earthly body, it will continue to function; eventually you have to pee and the kids are hungry, the dog needs to go outside, the mail comes with more bills and before you know it, some time has passed and that most painful point in your life is a few minutes farther away, and a few minute points less visceral until the next wave comes. That’s all the comfort I have managed to find.

Sometimes I feel like everyone’s gathered to witness a train wreck, or that maybe I’m in the middle of one and can’t see the forest for the trees… I’m in no position to know better. I do know that a huge part of myself will forever be aching, darkened and vacant- but in my better moments, there exists a larger space that is full of love and gratitude for the short time I was granted with Patrick, and all that I took in- and will continue reflecting on- during that time for the rest of my life.

That said, it’s time to clear out the cobwebs around here and try and make some progress on my writing instead of just in the numbers- the balance is way off. To correct it, I plan to try and write here more often (maybe some set amount of times a week?) to raise my number of posts per month and also try and shrink the number of followers that I am trying to counterweigh by sharing some things I do know about myself that have caused others who came to pity, scoff or judge to dislike me, in no particular order:

Part of the reason this is worth mentioning now is because after Patrick died, instead of bereavement support, I had CPS and the police at my door trying to take my older children, arrest me and place my son’s death in my lap all because I have always been open about marijuana, and there are common misconceptions that even the CPS worker had. “Well, your kids could eat some and overdose and die.” for example. Nope! No, they can’t, and that’s exactly what I said to her face, so I have no problem saying it here.

The fact that marijuana is still a schedule 1 drug, (viewed in the same way as heroin, instead of as a medicine that has allowed me to stop taking any pharmaceuticals- even after the loss of my (marriage, father and) son) made me a target for county services instead of a newly bereaved mother who was supported by them, at a time I needed that support more than ever. Yes, I support the legalization of marijuana- yet this, like my loss, is only a portion of who I am and what I believe, and isn’t tied into everything I post, either.

Have I lost you yet?

What if I tell you that…

I’ve worn ten zillion hats in my parenting journey, so far- to judge anyone else’s position would be to judge my former self, and I know good and well that I was trying the best I knew how when I voluntarily stopped breastfeeding and bottle fed my first three kids, left them to cry when I was overwhelmed (and usually crying, myself) raised my voice or swatted at their hands or little booties when I wanted their behavior to change.

I didn’t know any better, was supported by friends, family and society in those parenting choices… yet felt I could do better if I could only find out how. So, I now try to provide a place where parents can seek information and support to improve their lives and parenting as they see fit, in the way I wish I’d been able to do when I started down this parenting path 12 years ago. 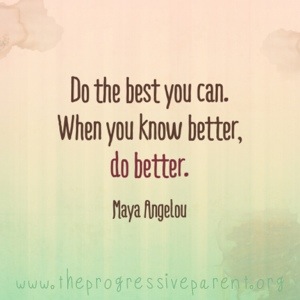 I’m of the “Do the best you can. When you know better, do better.” persuasion- and no one is going to be any better, least of all me, unless there are opportunities within our minds, hearts and communities to leave what is familiar and seek what is healthier, better, more interesting, more fun. “Progressive” means “marked by constant improvement” and that is all I have ever aimed to do. Neither I or anyone else can do it alone, which is why I made a place that respects, welcomes and celebrates a wide variety of parenting choices and styles.

If you’ve read this far, I’m equally amazed and appreciative. If you choose to delete me from your cyberworld for my heresy towards your reality, I understand completely. I don’t even like or want to be around me half the time, but not because of any of the reasons I listed- you’ll have to stick around for those. I can only promise that I will keep trying to improve in every way possible- and it may even happen… but you can count on me to make mistakes, to keep trying and to keep choosing love as best I know how, no matter what anyone thinks of me- myself first and foremost.

I’m closing with the video 1000 Oceans by Tori Amos (my all-time favorite singer/songwriter, as a fact about myself I’ve been long aware of) that I mentioned earlier. It came out in 1999 and I loved it then, but both the music and the video speak to me in ways I’d never imagined now. Grief feels very much like being inside a barren box, watching the world go by, watching people watch me to see what I’m going to do. Some have compassion for me, sometimes it’s the other way around, sometimes it’s mutual.

The title of the song ties into another thing I’ve learned about grief: it comes in waves, sometimes tsunamis, and it constantly feels like drowning in a vast sea of ache, anger and unending despair. (And I’ve certainly cried 1000 Oceans by now.) I’m still struggling to find shore, or even the surface some days, but I try to just keep swimming.

Sometimes, it even works.